As the old saying ‘ You don’t know what you have until it’s gone’.
And it often will be the case.

Kagawa prefectual Gymnasium which thrice failed to get a prospective bidder who were to restore the building to a quake-proof one, resulted official closure on 30/09/14′.

We believe this building is preserved and handed down to future citizens of Kagawa prefecture as a historic architecture.

Here we request the followings to Kagawa prefectural government.

1, Thinking of its future, the word ‘Demolition’ is taken off from the agendas.

2, To preserve its exterior, interior as long as possible without losing elements and implementing the building for better use.

3, To hold a public meetings to seek broader suggestions concerning this building’s future use.Prior to the meeting, Kagawa prefectural Government is to deliver all informations regarding the Gymnasium to Kagawa public through media or other effective means possible.

Kagawa prefectual Gymsasium was designed by an acclaimed architect ‘Tange Kenzo'(1913-2005).
who won worldwide recognition as a first Japanese designer at that era to design many famous architectures such as Hiroshima Peace Memorial Museum,Yoyogi National Gymnasium, Kagawa Prefectural Office East Building and this Kagawa prefectual Gymnasium which completed in 1964, same year as Tokyo Olympics was held. Kagawa Gymnasium has been attracting observers from all over the world as of now in spite of the fact that it was completed 50 years ago.

We revisited the gymnasium to contemplate what this building means to us and to future generations of Kagawa’s as a whole after having heard a shocking news of the gymnasium’s official closure and its future plans in which ‘demolition’ was on the platform.

Then we realised that it not only has a legacy of Tange’s historic masterpiece but also it contains profound memories we Kagawans have to this unique shaped entity and people’s eagerness to keep this building as a prefectual treaure better be preserved forever.

1. As A Local Symbol

Kagawa Prefectural Gymnasium keeps to be called “boat gymnasium” among Kagawa citizens as its unique facade reminding us of Japanese traditional ship. It is one of the symbols of Kagawa as an art prefecture.

2. As An Indoor Sports Hall of Fame

Student athletes in Kagawa were eager to play there in their future and to be qualified for the national competition. It has been their dream stage and an indoor sports hall of fame for 50 long years.

3. As A Public Space

Kagawa Prefectural Gymnasium lobby and its outside were open to the public. Regardless of use, each citizen could spend their time and interact seeing Tsukiyama and a pond on a lobby sofa or taking a walk. It adapted to its surroundings and people took it for granted to exist in their place.

4. As An Architecture After World War Ⅱ And Japan’s Rapid Economic Growth

Takamatsu city in the air raid lost thousands of people and a castle townscape with a long history. Recovery progressed in burned area as each light turned on in darkness. Giant construction site of Kagawa Gymnasium must have encouraged people and become a light for the future. That is why it makes us feel its power to walk with people.

5. As A Dramatic Architecture

The entrance of Kagawa Prefectural Gymnasium seems to be big eaves stretching up. The shape opens to town gently and invites visitors. An arena at 3rd floor has a symmetric curved ceiling to grow tension and uplifting feeling before competitions or ceremonies. It’s a rare gymnasium that spectators can watch games at the same level as players because the arena is united to seats without steps.

Visitors walk into the entrance connected with town life, run after expectation what will lie ahead, step up gently curved stairs and reached at competition field. The come-and-go experience was so dramatic that became an impressive memory. Kagawa Prefectural Gymnasium in defferent use can utilize those architectural features.

6.As the Crystallization of Various Architectural Techniques

It is not easy to construct three-dimensionally-curved buildings of reinforced concrete, even with the highly-developed architectural techniques available today. The accuracy and proficiency of the craftsmen who were involved in constructing Kagawa Prefectural Gymnasium is just amazing, considering that it was designed several decades ago, when computers were not developed adequately enough to deal with designing such complicated architecture as this with delicate curves and forms. This gymnasium was constructed using various skills which very few craftsmen of today posses.One of them is the use of curved molds made of sugi (Japanese red cedar) boards. It is hard to find an experienced craftsman who can make finely curved molds. The walls of the gymnasium are surfaced with scraped white limestone, and the frames and glasses are beautifully fitted into undressed concrete, both of which require skills only the experts posses. These architectural techniques are extraordinary and, therefore, worth preserving. As they are so specialized, they need to be handed down to the craftsmen’s successors, or they will be lost forever. This gymnasium can, if successfully improved, help to regenerate the accumulation of existing skills of predecessors into a new form of architecture.

7.As One of the Masterpieces by Tange

There are two examples in Kagawa Prefecture of architecture representative of Kenzo Tange. One is Kagawa Prefectural Government Office, East Building, and the other is Kagawa Prefectural Gymnasium.The former was built in the 1950s, and he attempted to apply a Japanese style of architecture, framed with pillars and beams, to more modern design. The latter was built in the 1960s as a model of Yoyogi NationalGymnasium, his most famous masterpiece, where he challenged how he could produce vast space with reinforced concrete. Both pieces of architecture embody the profound theme of Tange’s work; Tange was a leading architect of Modern Japanese architecture. It is notable that two different styles of Tange’s architecture exist in one single city. They could be called the cultural heritages of the world, also, of the history of modern architecture itself. They can, therefore, be promising source of tourism in Kagawa prefecture.

8.As A Public Building Familiar to Citizens

Anyone who has visited this gymnasium, and residents in its neighborhood, feel familiar with it, rather than just considering it as a normal public biding.In a response to the news of the failure of bidding for quake-proofing, more and more people are paying attention to what will become of this gymnasium.We, the Association of the Preservation of Kagawa Prefectural Gymnasium, have obtained more than 2,000 “Likes” since we started Face Book page 3 months ago.

It must be a big loss for our society unreplaceable features of Kagawa Prefectural Gymnasium unused and disappear. Now why doesn’t it need to fully appricate the memories and possibilities to give it new different use and value for the next generation?
In a poor period, even two decades after the world war Ⅱ, one giant boat with big dreams and hopes for open sea loses its way. We cannot let it sink. We want to replace the sail for the voyage again.
We must have strong showing of support.
Add your name.


Association for the Preservation of Kagawa Prefectural Gymnasium PV
Tweet

Association for the Preservation of Kagawa Prefectural Gymnasium 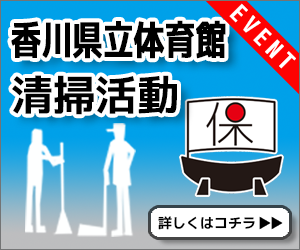